Wendy Andrews from Queensland, Australia #emerges proud to tell us how it took somatic release therapy for her mind to catch up with the wisdom of her body, years after a traumatic experience. Wendy’s experience is not uncommon, although not yet widely recognised. It’s through sharing our stories such as Wendy does here, that we can raise awareness and give hope to those who may still be stuck in suffering… 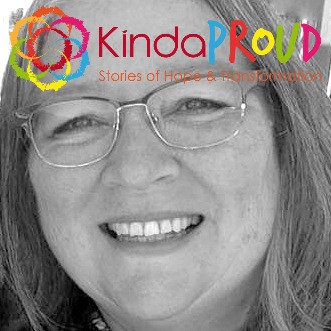 I want to write about what was, for me, a very powerful healing session, and its follow up session, recently. I’ve been clearing away the detritus of my past for almost thirty years, using mainly, emotional release work in listening partnerships. The labels I’ve used to find information and research are Complex PTSD, panic disorder, and agoraphobia. I experienced childhood sexual assaults and started having what were treated as ‘epileptic seizures’ in my late teens, but which turned out to be a body response to trauma overload.

“My intention was to increase the sense of capacity for stress in my nervous system, to grow the ‘window of tolerance’, as it’s referred to, using Somatic Experiencing, with Raquel DuBois. I’d had two sessions with her in person, and then switched to Skype.

“I started by noticing what was going well, for instance, I talked about the chaotic things that had happened in my home over the previous few days and how I wasn’t reaching overwhelm as quickly as I would have in the past. It took a few days to reach that point, rather than a few minutes.”

“A memory had come to my mind a few times and I mentioned it, because, as unrelated to anything as it seemed, over the years, I’ve learned to trust what ‘pops up’. I’d gone in to have my wisdom teeth removed, somewhere around the age of 18. I had a general anaesthetic in a small surgery one Saturday morning. I’d only briefly met the dentist once before. The way I remember being told afterward, I’d had to be given extra paralysing grains by the anaesthetist as it wasn’t working properly but eventually I went under (I do remember excruciating pain in my thumbs as I counted down).”

“The next thing I knew, I was being brought around. Apparently, my nails had turned blue and the operation had to be aborted, even though they had all the tubes down my throat, and were about to take out the teeth. Because of the extra paralysing grains, I was in intense pain for days, as though every single muscle had been overworked and I could only sip drinks and soup as my throat was so sore. Luckily, my Mum looked after me. She was always kind when we were sick….though neither she nor my father enquired further into what had actually happened.”

“Raquel had me notice what I was feeling in my body. My mind was telling me I was ‘wasting my session’ with this random story but she suggested staying with it a little longer. I started to have a very strange but familiar feeling creep around the back of my skull.”

“It wasn’t the ‘whooshing’ out the back of disassociation but rather, kind of like a blankety helmet enveloping my head and pain in the base of the skull. It was becoming very hard to form words and I felt I was looking at Raquel through very hooded eyes. ”

“I was reminded of other things going on around the time of this dental surgery experience. I was on epilepsy drugs and spent many days in my teacher training lecture theatre, with its low banks of fluorescent lights, fighting off these similar feelings, seeing a white ‘aura’ appear around the lecturer, and now it was there, around Raquel. ”

“I felt my body start to ‘give in’ to the ‘seizure’, felt my jaw start to tense, and my forearms…..so we dialled it back a bit….and I was amazed that I was able to…..still be there with it but not going to that old familiar place of fighting off the clenching and then giving in to it and eventually ‘passing out’ (I could always hear though, as far as I could tell, so used to think I was ‘doing it for attention’ somehow).”

“Raquel, at one point, had me count backwards from ten, the way I did with the anaesthesia. I could only get to nine and started to shake and cry. My head felt very, very strange, like in a fog. Her take on it was I was ‘in the anaesthesia’, that I had had a near death experience and this was the survival energy AND the anaesthetic stuck in my body….and we were helping it move out!!”

“I think I had a big release, possibly with tears and trembling, I’m a little unclear at that point. But I slowly felt myself returning to ‘normal transmission’, until I was laughing and ‘fine’. I had a HUGE realisation that the anaesthetist had SAVED MY LIFE (and so did my blue fingernails). I’d never had it mirrored anywhere that I’d been in a life and death situation. But when I looked things up afterward, yes, blue fingernails were a sign of either cardiac or respiratory failure.”

“This whole experience definitely created greater capacity in my nervous system because the very next day, I had to go and have a tooth removed and I handled it like a boss. I stopped them when I needed to and trembled and cried AND I was able to self soothe through the pain and the triggering trauma of them doing painful things in my mouth, even though I hadn’t been able to bring outside support with me. I didn’t need to use pain killers of any kind, and it was a big tooth!”

“Soon after that, I attended a meditation class and it became clear that when I put my attention on breathing and especially the experience of emptying the lungs and briefly being in that space of ‘no breath’, panic would usually surface right at that point……which must be VERY reminiscent to my body of ‘respiratory failure’, of literally having no breath inside me and not being able to get any! ”

“It all made so much sense, the years of panic attacks brought on by elevated heart rate, the difficulty in meditation every time my focus is on the breath….my body is triggered, even though my mind was unconscious, my body remembers.”

“And bless its cotton socks, my body has been trying to heal on that all these years, taking me to the place, over and over, where it can attempt to offload the ‘inability to breath’ and the survival energy stuck there…..and my mind has sensed the panicked feelings and freaked out, doing all it can to pull me out of that dangerous situation. My darling body. At the end of that session with Raquel, I actually FELT how miraculous my body is, how SENTIENT, how IN MY BEST INTERESTS it is. And I feel excited, once again, about life.”

I have since had another session with Raquel, dedicated to clearing more where my body released the stored energy in a very gentle way. And I am happy to say that I can now walk my dog around the block without going into a hard-to-breathe meltdown. Other situations where my heart rate rises, like being in social settings, I now only have what I think of as common, garden-variety anxiety, not what feels like life-threatening panic. I’m so grateful.”

Thank you Wendy, for speaking out to bring awareness to this vital subject on so many levels ❤

Does Wendy’s near death experience resonate with your own?

Would you like to share your story in Nicole’s book #Emerging Proud through NOTES to give HOPE to others?

Or maybe you have a personal story to share about overcoming early trauma?