Max Lewy, Poet and Author, describes how he we should madly and proudly question the predominating narratives in society…

Writing can be a huge form of catharsis, and Max is a shining example of putting his talent to good use. Meet Max Lewy; Author and Poet, as he takes us on a journey into his musings… 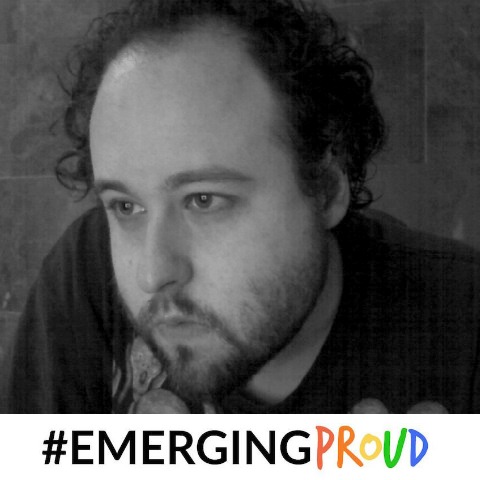 I wish that my story were an archetypal tale of awakening and success, like ‘Camelot’ (a name designating the contemporary Welsh town of ‘Caerleon’; where I was once committed), ending in the slaying of the dragon and a hero’s homecoming to his rightful throne. Alas, my own story is more fitting for troubadours who dwell less on romance, and more on sheer penury; but even then, without the clear cut ending that might at least give the wan tale its mythic resonance.– no tragic, sudden demise, but rather long drawn out, tortuous thwarting of the bloom of youth serving only to truncate and mediocre the otherwise hilly peaks, rather than to give them relief by way of the equally necessary valleys, cascaded with rivers of sweet sorrowful and cathartic tears only to enhance the grandeur of their eventual triumph.

More cenotaph than cynosure, I cannot claim to be an avatar for others; I am more a warning of the way not to travel. Yet for those who have the ‘subtle fingers for nuances’, an eye for the ‘Devil’ – that is ‘in the detail’ – I believe that in the telling many hard but crucial lessons can still be learned from my own unfortunate escapade, which should help prevent the need for others to experience them in the regrettable and highly prodigal way that I did. Rather than revealing all just yet though, here I shall merely attempt to summarize some such hard-fought wisdom.

As I say starkly in one my poems (‘Clap Those Hooves’), ‘The world is not out to love you, its out to shove you.’. Have no doubt, what we are facing here is a merciless life-death struggle where the outcome will determine not only the quality and bearableness of your own existence, but the ultimate rulers of this planet. Let that certainty steel your resolve, and spur you to awaken from the dogmatic, ideological, pre-programmed slumbers of your youth and so-called ‘education’. There is no time for frivolity, for messing around. We are taught, we are led by our masters, those who seek power and profit above all else, to believe that this world is a mere fair-ground ride or all-but perfectly-ordered machine, where we can just afford to wile away the hours, days, and years of lives on mindless ‘entertainment’ or getting our noses in front of the Joneses in the pre-ordained, rightful rat race, safe in the knowledge that should we fall or fail a sympathetic, all-knowing system will take care of us. One look at history, slaughter upon slaughter, oppressive government after oppressive government…or the real nature of this so-called ‘caring’ system, in which 10s, 100s of thousands, or even millions of innocent, trusting people are drugging, often forcibly, into oblivion by poisons that are scientifically proven to damage and shrink the brain…. and the curtains begin to fall away. Truly, the world is so very difficult to fathom, and if you start making claims that you can’t totally prove, they will seize their opportunity and strike where you’re vulnerable. Thus, I limit myself to what I know with certainty, and make only a few reasonable calculations and deductions from that sure knowledge. I know from my very own personal experience, a long with countless testimonies of other oh so-patient ‘patients’, that this present system forcibly poisons and detains such numbers of people, in a way that I can testify without a shred of doubt from my very own experience, from their own research papers, their own certified ‘Dr.s’, and from any logical, non-ideologically motivated insight into the nature of the process, causes immense iatrogenic harm, which can range from what they call in other circumstances, Post-Traumatic Stress Disorder to a variety of known (and undoubtedly some still unknown) disabling brain and body ailments.

I deduce from this, that there can be no trust in either the benevolence or competence of our governments. Hence forth, all conspiracy theories remain on the table. The only rationale against them, the only thing that would turn them into a ‘mental disorder’ is the sacralization of  blind, stupid trust, demonstrably false faith in the ‘powers that be’. This very sacraclization, and the enormous will to impose stigma on the questioning of society’s foundations it represents, is itself the ultimate affront to free minds and sufficient refutation of the so-called ‘science’ in question. Thus, we have already encountered two enormous reasons for, so far from trusting the ‘benevolence’ of the ‘powers that be’, actually asserting their positive malevolence. Though this case could be no doubt explored in infinitely greater and more disturbing scope, for reasons that have already been alluded to, along with want of space, I will rest my case here.

So, briefly, what do I offer in replace of this saccharine, self-serving, deceptive trust? What I offer is the myriad and wondrous nature of your own, personal lived experience and the unfathomably mysterious and wondrous (though often unspeakably brutal and implacably foreign) nature of the Universe, which calls out for our own independent inspection, free of all pre-conceived dogmas and ‘just so’ stories. What I offer is the DIVINE MADNESS, the lunatic curiosity and ultra-functioning of our epistemic faculties, of philosophy, of living in such an uncertain world, together with the heroic endeavour and steely warrior mentality, which craves sacrifice, danger, and heavy loads, in the noble pursuit of the goals of personal and collective freedom, self-realization, betterment, and healing through the uniquely human power of the Word, and yet all too often is left (yet nevertheless manages) to find its frugal succour and sweetness of existence merely in the bare accomplishment of animal survival in a world so commonly arrayed against us. The joy of lifting the lid on our maniacal overlords – or joining them in their plot. Let the fact that we have all survived this long, so many generations up ’til now, that we are at bottom all forged like polished steel in the unforgiving Darwinian fires, give you heart and confidence for the future, but do not let it blind you to the stupid every-day assumptions, herd-like stagnation and complacency which we have been raised like farmed cattle to suffer – lest next time you get caught on the wrong side of history. That is merely facing your destiny, that is EMERGING PROUD.

As the 20th Century Georgian mystic, G. I. Gurjieff once said, ‘the potential of the human mind is very great’. Even Einstein, orthodox scientist though he was in many ways, said we use but 10% of our brains. I urge you to pursue the path of Enlightenment, of inner striving and leaning towards personal activation of the latent faculties of our minds, though both material factors such healthy diet, exercise, abstention from deleterious chemicals; and spiritual factors, such a meditation, study, courage, moderation, discipline, reliable sleep, removal of self from obnoxious, insensitive, patronizing persons etc.

As for my own story… I could go into devilish details, and probably will at some point, but, really, they are of no great importance. I was merely caught half-way in my journey of unfoldment, in my process of coming to terms with these basic, real but quite shocking truths of existence, making hard choices and embracing life, both my own personal set of circumstances and the general menagerie. To quote another of my poems (‘Lobotomized The Beast’) ‘To those seeking ‘help’: Get out before you get caught.. and lend a hand to those who haven’t been so lucky”. In sum: have faith in yourself, take personal responsibility, and don’t make the same mistake I did of believing there’s nobody out to get you. But then – somewhere deep in your noble warrior soul – you know it was meant to be this way. ; )

And if questioning the predominating narratives is called ‘madness’ nowadays… Let us proudly go mad!

Max J. Lewy, author of ‘Madness: a form of love’

Thank you for sharing your intelligent musings with us Max!

2 Responses to Max Lewy, Poet and Author, describes how he we should madly and proudly question the predominating narratives in society…