Elliot is KindaProud that with his willingness to accept guidance, he is set for success at the Paralympics

Do you have an ‘Eye Inspire’ story of #Emerging Proud through Eye Sight Loss you’d like to share?

Sometimes it takes being sent off-course to rediscover what we are truly passionate about, and allowing ourselves to be supported back to where we need to be. Elliot has found that, through accepting help from his family and teammates, that has helped him to reach the heights that he always dreamed of…

My name is Elliot Stewart, I was born on the 22nd February 1988 and I am an under 90kg Para-athlete heading for Tokyo 2020. For a little bit of back story – I did Judo from a young age, my dad was at the 1988 Seoul Games and won a bronze medal. That was the year I was born, so I was basically born into Judo and have done Judo for most of my life.

I started a family over there, in Hong Kong. I had two kids and then came back to the UK with my children so that they could come back here to be educated and then also had another child over here and got married. So, at the age of 25 I was married with three kids.

I decided to go to University and become a PE teacher over here in the UK. I attended Wolverhampton University doing a Physical Education course. Year one and year two were great – I really enjoyed it.

In year three, when I was 27, the final year of my course, I started struggling to see what was on the board. I thought it was just my eyes deteriorating; I was getting a bit older. I went to the opticians and they gave me some glasses. They worked for a little bit but then the month after I had to go back again to get them changed and change my prescription. I did this about three or four months in a row. On the fourth month they said that I might have a condition called Keratoconus, which is where my cornea is in a cone shape.

Surprisingly it is actually quite common in a really mild form but I went to go to hospital to get it checked. They said that how much my cornea had morphed was quite a lot. So I had to have an operation. I decided on private because it was such a long wait on the NHS, they said it was a five month wait and within that five months I might have to have a corneal transplant, which I didn’t want to have. All my family (my brothers, my wife, my wife’s family) put together, they all chipped in some money to have my eyes done. Both my eyes have cross linking on both, so the operation was to stop the morph on my cornea and to keep the vision that I had currently.

Just to explain my vision – it varies day to day, it is basically like looking through tears, or the bottom of a glass. Where everything is blurred and you can’t focus on anything, you just can’t focus. So nothing is ever clear. That is the vision that I have been able to get used to over the last three years. I had that operation. (Cross linking you are basically staying awake and they numb your eyes and they use vitamin D and laser treatment to harden the cornea).

The recovery was a lot worse than the actual operation. It took me two weeks to recover, three days with my eyes tightly shut. Again I was around my family, around my kids, so that was really difficult. Them knowing what was happening to me and seeing me going from being with vision to losing my vision. That was a really difficult time.  My wife was there helping me through all the tough times, and without them I don’t think I would have been able to do it.

After I had the operation, I finished my university course, luckily, and they really accommodated for me. They understood my operation and they helped me out. I was able to use voice notes for all my exams, all my coursework, my dissertation and presentations that I had to do. They really accommodated and helped me to finish my final year. I passed my degree, which I am really proud of because I didn’t think I was going to be able to do it with the vision that I had at the time and the operation going ahead.

After I had finished that I didn’t feel like there was anything left. I was working in schools at the time, teaching Judo in the UK whilst I was at University. Because it was my vision they had taken my driving licence off me and I wasn’t able to work anymore. I felt like I wasn’t able to look after my family because I didn’t have a job. I didn’t think I would be able to get another job with my vision because I always thought ‘why would you want some who has a visual impairment when you could pick someone who has totally fine sight compared to me?’

Two or three weeks after my operation I was pretty down, I had given up really. Then through Judo, yet again, I found out about the visually impaired team, and found out about the Paralympics and that they had quite a strong team here at the British Judo Centre of Excellence.

I went back to Judo, after speaking to Denny Roberts and British Judo Paralympic Head Coach, Ian Johns, about it. They were really keen to get me tested, get my vision tested, to see if I qualified to be a para-athlete and luckily I did.

So far I’ve been in the system for just coming up to three years now and I have got two world bronze medals and a European bronze medal. So I am achieving those goals, training hard and back doing the sport that I love and those days where I gave up and didn’t think I would be able to do anything (I wanted to but I didn’t think I could) – those days are behind me now. With the athletes around me, and the rest of the team, they’ve taught me how to be a VI athlete and how to be a visually impaired member of the community.

Even though I am the oldest person on the team, in some ways I guide the team and I’m an older brother to the team, I still rely on them a lot to help me get through everyday life because they are a lot more experienced in being visually impaired than me. With that network of people around me; my family the VI team, the coaches around the Centre, it gives me the confidence to try and do anything I need to do, or at least ask for help to accomplish the easier tasks. 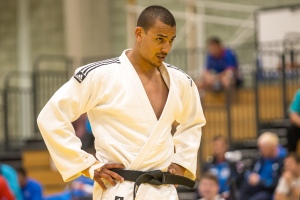 Do you have an ‘Eye Inspire’ story of #Emerging Proud through Eye Sight Loss you’d like to share?