Dr Nicole Gruel sends a NOTE from down under!

Dr Nicole Gruel from Sydney, Australia #Emerges Proud to share the profound personal experience that was to set her on her life’s mission… 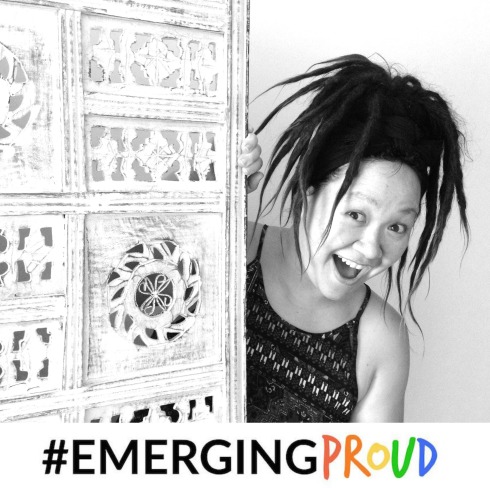 It’s hard to say exactly when an awakening starts and if it ever ends, but I shall nonetheless try to describe here a key experience that forever altered how I walk the world. To give some context, I grew up in a very open-minded household with well-travelled off-the-beaten-track parents. When I was 7 years old, I asked my father, “What God do I believe in?” His response, “ Anything you want to, darling” was both a great blessing and a curse. It was a blessing in that it was up to me to find my own answers. And for this same reason it was also problematic, setting the tone for my inner and outer worldly quests for much of my early life and well into my twenties.

Also, when I was 14 years old I had a near-death experience by drowning whilst white water rafting in New Zealand. In the following 6 months I lost three family members, including my father, all at separate times. These death experiences I later came to understand were a type of initiation into the non-ordinary realms. Although I was far too young at the time to understand and process all that grief, it nonetheless became a formative time and key to experiences that have followed.

Jump ahead to when I was about 30 years old and was having my regular womanly cycle, which was often accompanied by a day of extreme sensitivities and feverishness because of a sudden drop in blood pressure. Yet, this one day something was different. I was at home and started spontaneously moving in and out of altered states of consciousness. This lasted for three days. I remained feverish throughout this time and although my loved ones suggested I go to the hospital, given what I then knew about non-ordinary transcendent experiences (NOTEs), I decided to surrender to and be with what was unfolding, agreeing to go to the hospital if need be.

I’d describe those 3 days like a waking dream where I was at times aware of the ordinary world, and other times I was in non-ordinary realms. It was a layered journey that was somewhat both shamanic and yogic in flavour. During those days—though I was physically incapable of moving beyond the couch—I visited the deep lines of my ancestral tracks and took part in resolving unresolved matters that were having an effect on my life at that time, I processed grief and pain that had been locked away in my body for years quietly awaiting a time to voice itself, I was taken on spectacular visionary journeys, and I encountered a wild array of archetypal content. It was like peeling the layers of the onion of my being.

The 3 days crescendoed when the peeling of layers sped up and became more and more refined. I had trudged through the heavier psycho-emotional-somatic-spiritual molasses of my life and now the layers were thinning. Now the experience was getting to the core of me. Each layer at this point was an identity. For example, one layer was my professional identity. Yet when I tried to mentally grasp at that layer and that piece of my identity, it was torn away. On and on this went, faster and faster, with the tearing away of any identifiable features of self happening as soon as the thought would come. It was frightening and I was grasping desperately. Then my name. That too got ripped away. Then I was just a girl on the couch. That too got ripped away.

Then, just like that, there remained nothing but a speck of light. That’s it.

One single pinprick of light.

And with that the experience was over. I could rest.

From that time onward, life has been different. Looking from the outside, nothing much seemed to have changed. Yet internally and on all levels of my being a revolution had occurred. It was a reset button that enabled me to see the world and life upon it through new eyes. Those changes have, over time, made themselves manifest in the choices made and how I be with each day and each encounter. There have been other extraordinary experiences since, but that one brought me to the core of this being that I experience myself to be. That knowing continues to inform all that I am and all that I do.

Dr. Nicole Gruel is an author, life coach, specialist in NOTEs (non-ordinary transcendent experiences), and descends from a long line of samurai. Her books have been featured in leading Australian wellness magazines and have inspired people around the world to dive deep and take soulful action. She combines experience in teaching, international development, healing arts, counselling, Eastern philosophy, depth and transpersonal psychology, sacred ceremony, and creative expression to inspire grounded personal transformation and intentional collective action. Her greatest joy is igniting innate love and wisdom so people can get on with enjoying phenomenal relationships, live all they desire to be, and make a positive impact. Find out more via Nicole’s website:

We’ll be finding out more about Nicole’s work over the coming weeks, with a feature on her academic research into the transformative potential of NOTES, and finally diving deeeper in an Emerging Proud interview! We are so grateful to you Nicole for all that you do to support those going through these processes, and to normalise NOTES ❤