Do you have an ‘Eye Inspire’ story of #Emerging Proud through Eye Sight Loss to inspire others to go for their dreams you’d like to share?

Lachi hasn’t allowed the stigma imposed on her at a young age to prevent her from persuing and achieving her dream of becoming a successful musician and author, and she takes pride in encouraging YOU to do the same… 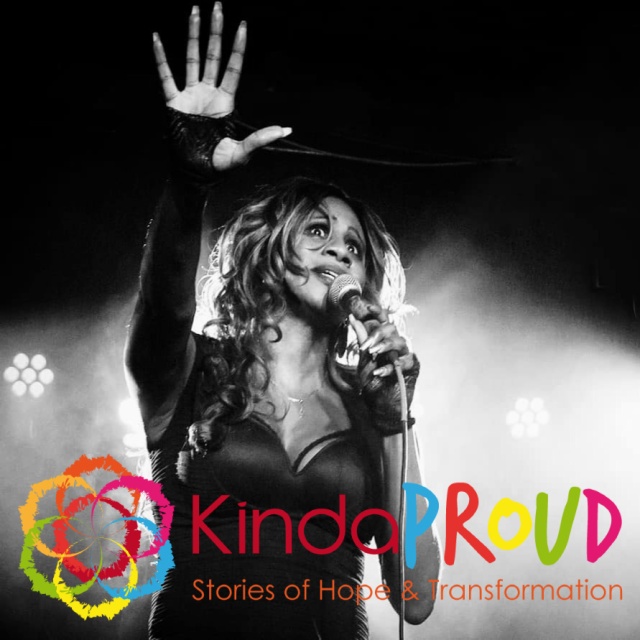 At eight, I dreamed of being a musician with a fancy management team and my own recording studio, being a published author with my own agent, and traveling the world for my art. But it was also at eight that I realized few of my favorite singers or writers were female, fewer were black, and absolutely none were blind. When I turned on the television and saw all the perfect people, I thought to myself, “That could never be me.”

I was born with a rare eye disease called coloboma, which left me legally blind. I could see up to about as far as my outstretched hand. This made it hard to read at pace with other kids. And the need for extra devices coupled with the frequent visits from social workers made it tough not to be different. Like many with disabilities, while my visual impairment made it difficult to see, my real trouble growing up was social. That is the overarching backdrop of my story.

Was I bulled? Yes, early and often. I have a lazy eye, much lazier back then. Or rather it was the opposite of lazy, as it actively did its own thing. Because of this, I was given the ugly kid treatment or the slow kid treatment, depending. Which was tough for a girl that had all the pretty girl traits, just no idea how to manifest them. Or a girl who had all the smarty-pants fixings, just no idea how to outwardly express them.

So I spent most of the early days in a corner with my keyboard, directing my chorus line of stuffed animals. I’d also steal stacks of loose paper from my mom’s home office printer, fold them in half to form a booklet, and would fill them up, pages and pages, with comics, short stories, drawings, poetry, and lyrics.

While my mother was encouraging of my big recording artist and published author dreams, both my parents preferred I err on the side of safety. It’s easier for a person with a disability to succeed on a straight and narrow path rather than forge their own, but those who move mountains and change the world very rarely play it safe.

I went to the best public college in my state, University of North Carolina, to study business, telling my dad and myself I was going to be an accountant. Wanting to mix music with being a college nerd, I joined the Glee Club, which was probably the worst possible thing for my accounting career. Being actively involved in music opened me up in a big way. I could express myself musically while being in a social setting. Sharing my talent with others, I felt things like pride and confidence, feelings I hadn’t felt before in social situations.

This propelled me to form my own acappella music group on campus. I had no idea how to start one on my own, so I posted ads in forums and hung flyers. Who knew over fifty people would audition. As my music ensemble grew in prominence, I began to put on my own solo side show. On Saturdays, I’d play my dormitory’s community piano for drunk coeds looking to continue hanging after a big party. These piano nights grew so popular that I began to book gigs around town.

Music now fueling my confidence, I mentioned to an advisor my dreams of pursuing music and writing in New York City. “So do it,” he said. Such simple yet most profound advice. And, so I did. Despite my parents’ and my own fears, it wasn’t long before I was studying music at New York University. I raised just enough money for the bus ticket and a few nights camping out at a YMCA, but it was certainly one of my best life gambles.

I could get anywhere I wanted through the convenient metro system for less than two dollars! Sure beat the limitations I faced with having to beg my parents to drive me everywhere, or waiting two hours for a bus, and another forty five minutes for a bus transfer in the hot sun or cold winter. Floating freely in a constant stream of musicians, writers, oddballs, rich yuppies, and folks with varying degrees of disability who didn’t think twice about them, all hustling towards greatness, was exactly what I needed.

After finishing up at NYU, I landed a job working for the United States Army Corps of Engineers as a program assistant. Sitting behind the desk clicking away, my body vibrated for that pride and that confidence I felt in sharing my creative talents. Times were tough at the Corps. I learned that being socially awkward due to a disability can cause cliquish behavior in workplace adults as well. And hammering around a self-advocacy bull horn of “accept me!” was tough for a girl who appeared to have all the fixings for a socially well-adjusted human.

One day, naturally, I got fed up with the lack of music and creativity in my life. I took a few days off work so a friend and I could play guitar/vocal sets at a few local bars down in Texas during SXSW, a large annual music festival in the region. Before going, I wrote a cold-email to about ten record label agents asking them if they’d be at the festival and to come to my one of my performances. No one responded. We went anyway. An agent showed up, and not long after, I signed a recording contract.

Ten years later, I now am an award-nominated recording artist recognized by the Grammys. I have a fancy management team and my own studio, am a published author with an agent, and I travel the world for my art. I’ve released music with Sony, Universal, and Warner Music, have had music debut on international dance charts with streams in the millions, have heard my songs played on the radio, and seen my music featured in TV and film. I’ve had the opportunity to work with some of the biggest names in the industry, from opening for Patti Labelle, to collaborating on a song with Snoop Dogg, to support from DJ’s like Armin van Buuren and Markus Schulz.

It took hard work and ingenuity, as I have to run ten times as long to get to the same destination as my sighted peers. But in working hard, thinking outside the box, stark determination, these things are like air to those who aren’t born with the luxury of monotony.

I’m most proud that I’ve been able to use my platform to help raise the visibility of persons with disabilities in mainstream media, as well as educate those who would otherwise have no idea the social stigmas the disability community deals with every day. I spread this message so that when an eight year old girl, who feels outcast because of her sight impairments or any other disability, when she turns on the television she can see herself prominently represented and think, “I can definitely be me someday!”

Do you have an ‘Eye Inspire’ story of #Emerging Proud through Eye Sight Loss to inspire others to go for their dreams you’d like to share?