Holly from Canada intuitively knew that what she’d been told was impossible, was possible. She’s now #EmergingProud to prove it!

Holly Chapman from British Columbia, Canada, now harnesses the wisdom from what was once labelled as symptoms of various ‘illnesses’ as her ‘board of directors’, listening to her visions, voices and sensitivities and embracing her ‘superpowers’ has helped guide her to a life she is now proud of – and so she should be! We are KindaProud of Holly and the hard work she’s put in to thrive through trauma; here’s her story so you can see why… 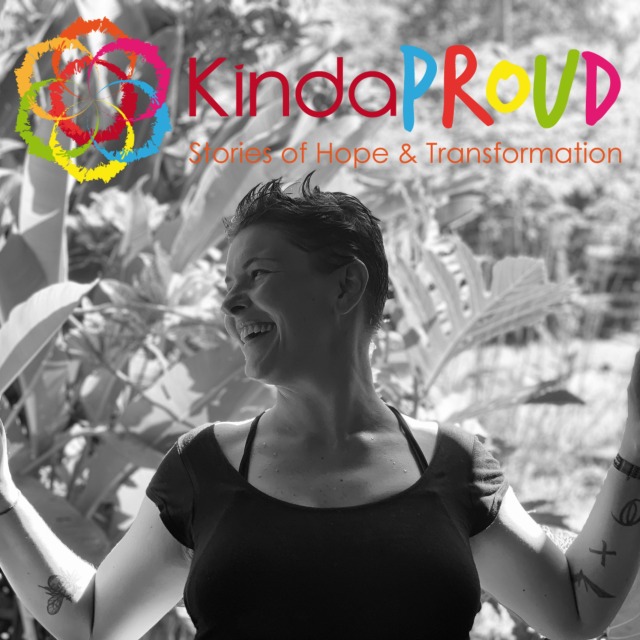 When does my story really start – Where do I begin; before my physical creation as an egg in Baba’s (grandmother’s) womb, with stardust – genetics/cellular structure & bloodlines, perhaps the birth where I landed in Toronto Ontario Canada on April 3rd 1980, with a family carrying un-checked ancestral trauma is where I’ll begin.

Preeclampsia during pregnancy with birth complications definitely affected both my mother’s and my own health; Mum was bed-ridden and experienced much pain and I was born green struggling to breathe via emergency caesarean. There seem to be many definitions within various communities about, ‘What is Trauma’ and the simple one that resonates with me is ‘too much – too fast – too soon!” It never quite felt like either of us were ready for our new roles … despite our deep desire to arrive. An’ if empaths are born out of chaotic environments, the universe surely matched me well as a seed in training as I quickly developed the ability to read an’ feel the adults around me accurately (this superpower would later be labelled as paranoia, hypervigilance, or hallucinations). In addition, it was consistently noted that I was “mature for my age” and an advanced, yet struggling student who didn’t get along well with others. Another gift often acquired via exposure to traumatic circumstances is an openness to other levels of awareness that is historically cultivated through study, meditation and years of practice leading to mastery. Obtaining this additional sense of the world – too quickly and without context – eventually resulted in my diagnosis of multiple mental/physical health challenges.

But how did I get this way?

“There comes a point where we need to stop just pulling people out of the river. We need to go upstream and find out why they’re falling in.”

Living with the inconsistency, insecurities, and impulsivity of a single-parent struggling with past trauma, mental/physical illness and addictions (in & out of rehab)

Bullying throughout school and first 15 years of employment

Bit by dogs on multiple occasions

Arrested under the influence of prescribed narcotics & anti-psychotics (multiple)

Assulted with a knife

In 2013 something shifted; following the third motor vehicle accident within a 6 year timeframe I was heavily medicated, unable to walk or talk or control my bodily functions, losing all material assets, including my home and – relationships, including my mother, that once formed my so-called life. I made a decision and it was this: I’d been willing on three past accounts to remove myself from this planet for reasons in that current moment I deemed quite insignificant, so was I willing to take a leap of faith this time in favour TO LIVE? You bet! And so I did. Moving from one city to another out of necessity created challenges in the transition of my healthcare needs, including prescriptions and though I don’t advise the “cold turkey” approach – it worked for me. What would a refugee do; what did my grandparents do escaping from war in their home countries? I come from people who moved with the times; my grandfather turned crops and my grandmother served tables – I come from masters of survival. I rode the rough tide of withdrawal with only one thing in mind – It’s my time to thrive! I knew I could conquer this metaphorical mountain, in fact I’d trained for this beyond my biological lifetime here on Earth. Finding peace and comfort between where I was and wanted to be became the practice. I discovered being here now is where the connected healing is at, and if “ya gotta feel it to heal it” holds truth then I’ve received a great gift and teacher through the intense pain I live with because I discovered a whole new realm of feeling, very different than my felt experience 33 years prior. Receiving the download during one of my episodes that pain is information running through me and how I process that perceived sensory “sensation” is now up to me. I began building a relationship with this body re-wiring new healthy patterns, often guided by two questions: “Does it serve” & “What is needed?”

Healing & health recovery are possible! With access to social media and the world abroad we’re seeing some amazing “miracles” in recovery these days; I use my time and resources with wellness in mind. Socrates reminds us that, “The secret of change is to focus all of our energy not on fighting the old, but on building the new.” Unemployed and seemingly unemployable, rebuilding my foundation became my work; I recognized the internal scaffolding was a ‘lil’ sketchy and I could see what was holding me up.

What’s worked for me:

Research on Happiness, smiling and posture. And practice.

Trust the process. It’s ok to have goals, and be here Now. I know I am enough. I had to toss the story of “that’s not for me” “I’m poor” “that’s for rich people” “out of my league” … I’m Becoming my best healthcare advocate. I wondered how athletes recovered and I researched (then I implemented); they participate in active recovery plans, they typically have healthcare teams, and they show up consistently! I Intuitively knew that what I’d been told was impossible – is possible. I also gained inspiration from artists & creators as they often brought dreamworlds into reality and my visions then became tangible.

“Every next level of your life will demand a different version of you.”

It wasn’t until my 29th year on this planet that I even gained an awareness that society en mass wasn’t composed only of bullies, beaters, cheaters, rapists, thugs and the like – sitting in an evening held continuing-ed classroom, reading a text on abnormal human development / psychology where I realized this was my life all in one book wherein the content was unsettling and frightening. My “normal” had just been challenged in a BIG way; discovering this information provided me a pathway of hope – a map to return to self. I suddenly understood how I’d reached my current circumstances and I knew it wasn’t my fault. I kinda felt like Alice in Wonderland at times. I was able to apply child development frameworks to work back- rebuild-remedy recurring chronic dis-eases/ill formed patterns in my life.

It’s been my experience that from a young age we’re read a fairytale on how life will be if we do this or that, follow these steps, or bad things don’t happen to good people so do good always (whatever that means). Based on this combination of ideals encouraging people to control their external environments and destinies through willpower with the idea that fairness is expected and desirable in life, I often found myself susceptible to negativity, drained energy, failure, disillusionment, and feeling overwhelmed as life presented itself fully.

I realized one day that many humans seek out and pay money to achieve an altered state, so I’ve accepted the symptoms of visions, a plethora of sensory sensitivities, and voices. They’re my board of directors and together we move through life; I work with the team.

“Butterflies can’t see their wings. They can’t see how truly beautiful they are, but everyone else can. People are like that as well.”

Although I still experience extreme feelings of isolation I’m aware that I wouldn’t have gotten to this place along the journey without ‘a little help from my friends’ – I express gratitude to each and every one who has participated in my story in real-time, and shared presence with me. Especially to my partner Derek Tse who has stayed on for the ride, respected my “No’s”, and shown me that kindness, compassion and acceptance does exist in (Hu)mens. Thank you for witnessing my telling of some of the lived-experiences I’ve encountered involving trauma & abuse. I am #EmergingProud.

Blessings along the Way,

You can get yourself a copy of Holly’s inspirational story in print in our 4th KindaProud Pocket Book of Hope, #Emerging Proud through Trauma and Abuse from 10th October 2019, when, with all of those who have taken part in this series, we aim to change the narratives for World Mental Health day to ones of not only surviving, but thriving ❤

1 Response to Holly from Canada intuitively knew that what she’d been told was impossible, was possible. She’s now #EmergingProud to prove it!