Last week we heard about Mandy’s inspirational journey through trauma and Dissasociative Identity Disorder, and how part of her recovery was due to the love and support of her partner, Ash.

We’re delighted to also have Ash in the KindaProud team as our KindaProud Creative Book Editor 🙂 We felt it essential that everyone involved in this project is a Peer, who understands the aims and ethos of project message due to personal experience. Ash is no exception; he too is an inspiration and passionate about creating change through giving hope to others.

Ash’s personal story will also be included in the #EmergingProud throughTrauma and Abuse book, and he will be supporting the team with the creative design, editing and production of the books.

We couldn’t be prouder and more grateful to have Ash’s expertise; here he gives you a glimpse into why he’s also so passionate to do this work… 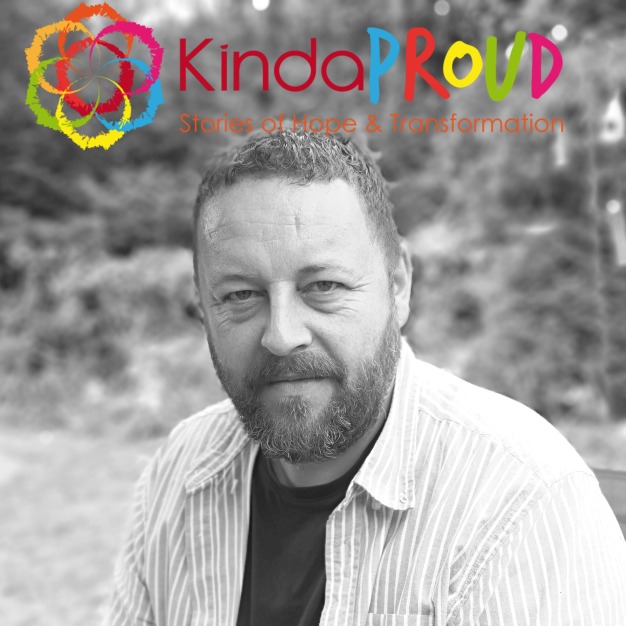 At the age of 7 I was groomed and repeatedly abused and raped for a period of 10 months. As a 7 year old from a happy, normal family I had no idea what to make of it except I had a new ‘friend’ and we had secrets. I told no one for 40 years.

We moved away and the abuse stopped. I spent the next 3 years in a state of darkness. I have no recollection of where I lived, who my friends were or what school I went to over that 3 year period. I had successfully blocked out the abuse but my everyday life at the same time.

My parents were hoteliers and this gave me opportunities that most young boys don’t have. One of them was access to alcohol and cigarettes. From 11 I was self medicating with alcohol before, during and after each day at primary school. In a few months I had mastered the art of manipulation and lying. On the surface I was a well behaved boy who never caused a problem for anyone. Underneath I was honing my skills at drinking without detection. My insides were black. All the light I had was taken from me when I was 7. I hated myself and had little time for anyone unless there was something in it for me. I began to steal from my parents. Small amounts of stock from the hotel to begin with which soon escalated into a thriving business. I was the go-to man at school for tobacco and alcohol.

My false persona continued undetected for the following years as did my pattern of behaviour.

At 14 my drinking was still my only true companion although I had 1 or 2 friends from school I would see at the weekend for parties or nights drinking in the local park. It was on one such evening that I returned home in the early hours to find a close friend of my dad’s still drinking in the hotel bar. Everyone else had gone to bed. I sat down next to him and helped him finish the bottle of brandy he’d been working on. That night I was raped for the second time. I told no one except my brother. He had just turned 15. He didn’t know what to do so it remained a secret. The pattern of my life was now set.

You pointed me in the direction of growing up

and then let me go

Without a map it was too easy to get lost

I avoided all the hold ups, all the congestion

I gravitated to the shortcuts,

the easy way that offered no challenge or interest

I arrived, empty and with no welcome party

I want to go back

I was desperately unhappy and spent the remainder of my school life drinking. I didn’t study and left with no formal qualifications. College lasted a few months until I dropped out and attempted to try and get a job. I was forever in this pit of despair but was desperate to get out. I remember being very scared. Scared that people would see the real me and my cover would then be blown.

After a few months I found myself entering a business that offered unquestionable loyalty and absolute respect. I remained in this role for 8 years.

My work was not 9-5 and this allowed me to forge a career along side. A career that was normal and non threatening to my friends and family. A career that blended in with the personality I had now created. Very few people knew who I really was. This began the next step in my life of lies, deceit and manipulation.

After 8 years it was time to move on. I had met someone and as the relationship grew it became harder to lead a double life. One year into the relationship my dad died unexpectedly aged 52. This had a big impact on me and my drinking escalated further. We had 2 children and separated a few years later. The children ignited something in me and I made the decision to stop drinking. The love I had for my children made me feel that I could conquer anything. It was the hardest part of my journey but after a few months I became sober. The following year I was diagnosed with bipolar.

I can’t just turn it on or off

It’s on a timer, of sorts

When it’s on I can see everything

It warms me with confidence

It lights the way to creativity

It allows me to see what I am capable of

But there is a price

When it’s off my world darkens

I am empty and worthless

I am tired but cannot sleep

I cry and feel despair

I lose interest in everyday life

I lose interest in life itself

This now helped me understand why I had self harmed for most of my adult life and why I had made a number of attempts at taking my own life. I wasn’t very good at this with one occasion where I jumped off a roof and only managing to sprain my ankle and bloody my nose. The year after I was diagnosed with cancer. Throughout this period it was the love of my children and my new partner, Mandy, that got me through this difficult time. My relationship with Mandy is based on honesty and not being afraid to talk about my feelings. Something I’d never experienced before. It’s this openness and revealing to her my past abuse that allowed me to finally move on.

The cancer was dealt with but has resulted in continued illness that still impacts on my life today. The bipolar is controlled with anti-psychotic drugs and anti-depressants. I’ve been stable and sober for many years now. I know I won’t put myself or my loved ones through the chaos that controlled me for most of my life.

I’m now 47. Loving and accepting love of those close to me has opened up a future that I never thought possible.

Thank you Ash for your bravery in speaking out in order to offer love and hope to others, and for your dedication to the KindaProud mission ❤

Ash now works for the social enterprise network supporting the charity The Missing Kind https://www.missingkind.org/our-network, who are also the sponsors of our KindaProud book series. Ash will be using his experience and knowledge of the issues facing many disadvantaged groups to deliver social impact projects across the network. He will soon be setting up and facilitating a support group for Male Survivors of Abuse at the network’s Missing Sock venue in Cambridge, UK. Anyone local to Cambridge who is interested in joining the group can contact Ash: ash@themissingsock.co.uk