Brave Alan tells us how an intense spiritual awakening opened him up to a new talent, and a new way of Being.

Alan tells here how an intense spiritual experience one evening opened him up to a new talent; channelling art from what he describes as “another Universe”…

“My beautiful wife Jenny, the loving soul that she is, had had enough of my crazy ways, but still she had that unconditional loving of a human being to come to my bedside that night and try to get me comfortable enough to sleep, she put me in a position that was just not comfortable for me, and then turned me on my side in foetal position placed the crystal in my left hand and worked healing until I seemed comfortable, when she left the bedroom quietly like the angel she is.

I lay there curled up like a child holding my crystal, what triggered the next stages came from a power that I did not recognise. I started the journey, all of me had to go, inside me I was riddled with nastiness a cancer of all that is sub human it was black it was controlling me it knew it had control and could control me at its will. I lay there and thought right this is the end I will win this, and then it began, I spoke to myself and said this is it, this must now begin to rid you of me.

At first my mind had to focus only on the blackness and the growling voice inside me, the noises coming from within were indeed like something from a Hollywood horror movie. My guts started to push on this heavy weight I said go now and forever it growled at me it was mine. I pushed I shouted it growled I tensed this was it, would not move, I knew that if I moved I would never rid myself of this controlling evil within me, my throat began to gag breathing became exerted my stomach pushed, my mind said stay with, fight it don’t let grow it began to growl my mind my body became one, the more I pushed the more it fought, I knew I must not release my grip or I would lose, I had to pause and regroup to gain more strength I felt the first drop of sweat hit my breast it was battle whatever way and why I knew I had to win, the force was nothing I had ever felt before, go, go, go you are not coming back. I felt I was in a space capsule it was dark it was confined I was mean, it growled I growled he was going my body was at maximum strength my mind was determined I felt movement inside me it was breaking and then the very first release from the middle of my chest just a tiny release, I then called the angels and Archangel Michael I screamed break this with me rid of this flood me, flood in waves of love I need you please help.

It started to begin waves upon waves of angels forward like fish flooding through a net, it started to break I guided the angels in lines to the left to the right, it splintered to the left to the right, begged them to keep coming we are on our way the light started to come through my body all in lines my throat was gagging I called for more air to push my mind ask for strength the angels kept coming they knew I wanted this needed it, I heard birds singing and I felt I was whistling, (rather strange as I cannot whistle) we were winning they were power angels on a mission a mission to save me to bring to the light, they knew a child of the universe was begging to be born, it growled in defiance it was going, the blackness had gone.

The work was half done I paused the angels paused we regrouped, we now had to clean me bring me to the light my top half of my body was a milky grey, my lower parts of my body the colours of wonderment, we worked in unison I asked the angels to go through the colours of wonderment, they knew, worked to do. I thanked them blessed them, like an army of ants the colours swept through, the angels were spreading love through me a love I never understood, the grey became white it was dying the old me, it was still growling but in the knowledge it was going, I felt no glory in this, and then I had a choice slay with the might of true warrior, or bless with love and let the past go quietly, the angels stood by, I took my mind back to my Jenny she always blesses with love, I said go now with love there is no victor, it groaned in pain as it left but it was grateful, I do not remember the angels leaving.

I lay very still for how long I do not know, it was calm though, I slowly gathered my thoughts, My feelings were of one very scared child, stunned I left the bedroom and went to the kitchen it was 12.00 am, I had spent one and a half hours upstairs fighting. I went into the garden totally gobsmacked and sat and cried with joy and astonishment over just what had occurred.”

2017 “I’m not sure why my spiritual outburst in art took so long. I have always known as a child that I felt disconnected, and indeed my life history tells me that as a human form in my current state I was and have been searching for home.

This art has come from nowhere led from my very deep and spiritual awakening in August 2014. The “Special Vision” picture (below) was my visual interpretation of my awakening that evening and the words attached were my first and only written interpretation of this event. I have hidden this from the world, simply because I felt people would think I was mad.

From that day, I felt that I indeed was living in a parallel Universe where mostly children and animals could measure my vibration. My viewing of humans showed me their journeys and I indeed saw the many difficult and weary souls.

I have no formal training in the subject matter of art nor was this pre-planned, the wording attached to my artworks sadly has been written in such a way so that I could show the world my art, but hide the spiritual wording that I saw and felt when I was in production, again simply because it felt that no one would understand what was going on within me.

I don’t know how the shapes are formed, I am taken to a Universe beyond my current conscious thinking. It is as if I am being led to leave earth a message for those who are left behind when my human form departs.

The Universe has allowed me to travel back to a lifetime I’ve never had in my childhood and what all little children may see and think.

I leave my story for you to embrace as my final destination is many journeys within journeys and one hopes I eventually evaporate to angel dust that sprinkles gently to all life forces.” 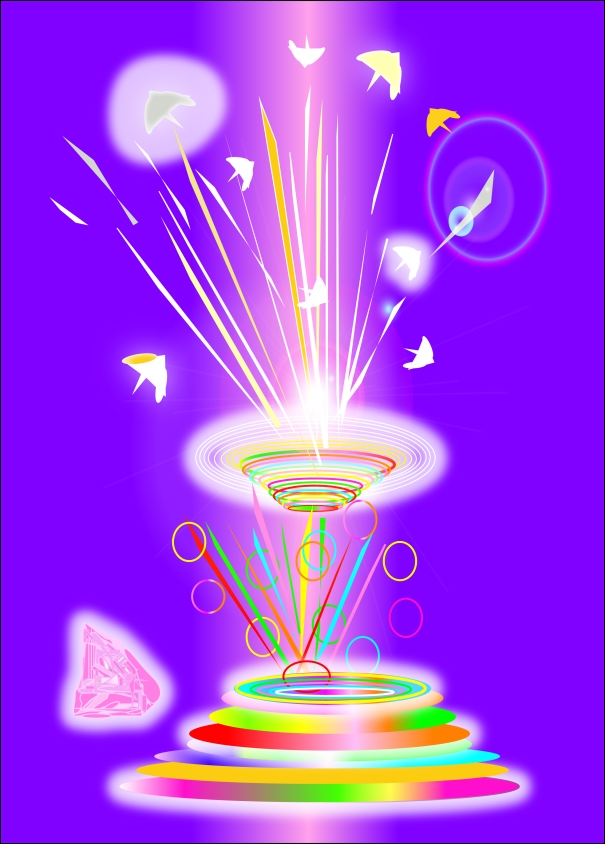